Sorry I haven’t posted in a while, but I’ve decided to participate in this year’s Month of Monsters. My first post is up now.

Wow, it’s been a long time ((It’s been a really long time, as Rob has pointed out.)) since I posted anything here. I never meant for that to happen.

Anyhow, the always amazing Natalie Metzger is hosting Month of Monsters, where people challenge themselves to create a monster a day for the month of October.  Entries can take the form of a story, or a drawing, or whatever.  I thought it might be a fun thing to try. My first post, Fnark in the Dark, is up now. ((I even included a doodle, which I can’t promise to do again, because that’s not really my strength.))

Be sure to check out the rest of the posts as well! 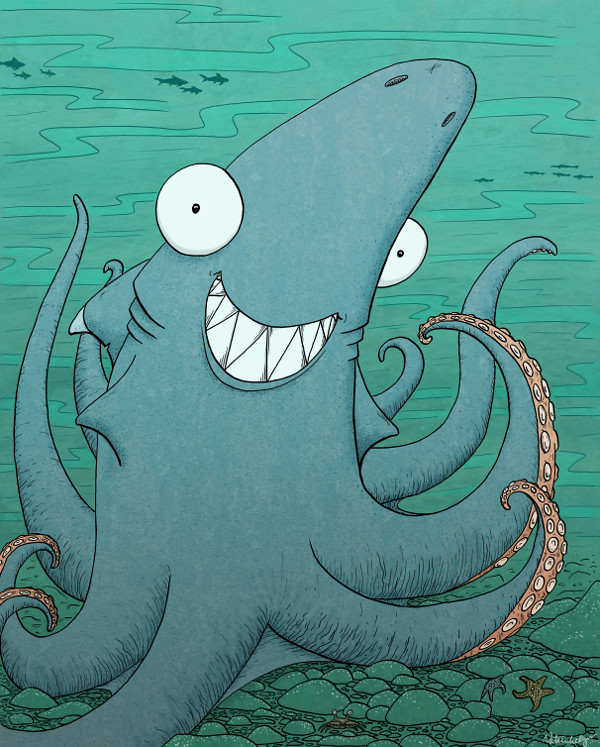 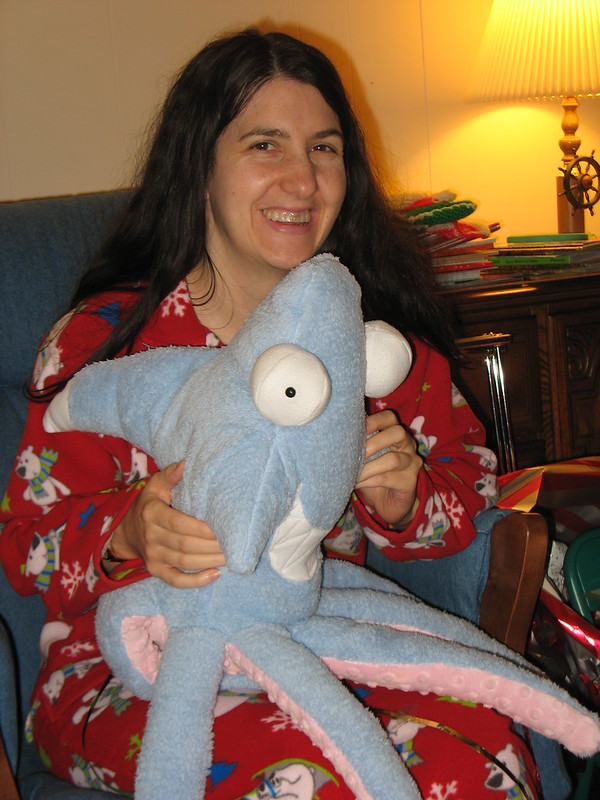 jQuery and Microsoft
When Microsoft started adding some of the often requested features to their ASP.NET AJAX Client API they realized that jQuery (my personal favorite javascript library) already did what they wanted. Rather than reinvent the wheel Microsoft will be shipping the standard, as-is jQuery with full intellisense support in Visual Studio.
Tags: microsoft, jQuery, ASP.NET, javascript, Visual Studio,
The Creative Process
“For me, ideas stream through my head at a frantic pace. I feel like a bear trying to grab a salmon. If my paw misses its target, that salmon is gone for good. I don’t dwell on it. I just lunge for the next salmon.” Scott Adams (Dilbert) discusses ideas, and how he sometimes forgets he’s already used them.
Tags: memory, Scott-Adams, Dilbert, creativity,
Tip: Using a background image on an image
Using CSS to create layered images (with a fun animated example). Simple but effective.
Tags: webdesign, HTML, CSS,
Fresh Out – PDF Version
Free fun little mini-comic from Natalie Metzger. You’ll laugh. You’ll cry. You’ll really want some cookies! Ready for printing.
Tags: Natalie Metzger, free, mini-comic, comics, cookies,
Sizzle: John Resig has a new selector engine
Ajaxian brings word that John Resig is working an a new Javascript selector engine, which is expected to replace the one in jQuery. So far it’s less than 4k (but it doesn’t support IE yet). “4x faster in Firefox 3, 3x faster in Opera 9, 1.5x faster in Safari 3 than the other major JavaScript libraries.”
Tags: John Resig, javascript, CSS, jQuery, selector-engine,

Next Monday, August 25, Mur Lafferty‘s Playing for Keeps will be available in print ((Technically the book is available right now due to the fact that Amazon listed the books when they arrived, but just ignore that. You can also ignore it if Amazon says “Out of Stock” because it’s practically meaningless.)) from Swarm Press. I’m really psyched about this one.

Welcome to Seventh City, the birthplace of super powers. The First Wave heroes are jerks, but they have the best gifts: flight, super strength, telepathy, genius, fire. The Third Wavers, like bar-owner Keepsie Branson and her friends, are stuck with the leftovers: the ability to instantly make someone sober, the power to smell the past, absolute control… over elevators. They just aren’t powerful enough to make a difference… at least that’s what they’ve always been told. But when the villain Doodad slips Keepsie a mysterious metal sphere, the Third Wavers become caught in the middle of a battle between egotistical heroes and manipulative villains.

Playing for Keeps does a great job of showing what it might really be like to live it a world where some people have super powers. It does this not by focusing on the heroes and villains, but on the folks with lesser powers. But it’s not all “I wish I had a cooler power and people liked me” angst (although there is some of that). It’s about friendship, about the dangers of seeing things as black and white. It’s also an action packed romp that’s a whole lot of fun.

Playing for Keeps was first release as a serialized podcast (in both audio and PDF form). The unabridged audio version is available from Podiobooks.com where it currently has five star ratings across the boards. This is how I consumed the book, and I recommend you check it out.

The Theme Song (now with video)

The audio version also featured the books theme song, written and performed by Beatnik Turtle. Mur recently held a contest where fans sent in video clips of themselves dancing, or lip syncing, or acting out a scene, or whatever to make a music video for the song. The results can be seen here.

Stories of the Third Wave

One of the most interesting thing that was done to promote the original podcast, was Stories of the Third Wave, a companion podcast featuring fan created content ((I contributed to Episode 6)) . For the print release Mur has started a new season of Stories of the Third Wave featuring short fiction and in-universe radio programs. You can get them all by subscribing to the feed at PlayingForKeepsNovel.com. So far it’s quite the line up:

Want to give the book a read right now? Then head on over and download the entire book in PDF, including a all new short story Parasite Awakens, not currently available anywhere else ((This story is intended to bridge Playing for Keeps with it’s planned sequel)) .

Look, Playing for Keeps is an awesome book. You should buy it, next Monday, August 25th, from Amazon.com. But you don’t have to take my word for it…

Matthew Wayne Selznick Signs Book Deal
Author and Podcaster Matthew Wayne Selznick signed a deal with Swarm Press to re-issue his novel “Brave Men Run” in paperback. Congratulations Matt!
Tags: books, Matthew Wayne Selznick, Swarm Press, Brave Men Run,
Take notes during phone calls with friends and family
One of those “that should have been obvious” suggestions. I’ve conditioned my brain to filter out most things that aren’t useful to me right now. This doesn’t mean I’m not interested in people’s anecdotes, and schedules, it just means I’m unlikely to remember them without some reminder.
Tags: lifehack, notes, Friends, Family, memory,
Ajaxian Featured Tutorial: Hacking transparent PNG support into IE6 with IE PNG Fix, CSS and jQuery
Ah, IE6. I’m pretty good at getting it to do what I want, but it’s very existence makes most of the things I have to do harder than they should be. This tutorial deals with one of the harder issues, PNG transparency in positioned background images.
Tags: hacks, javascript, jQuery, ie6, png, ie, webdesign,
YouTube – Sigler Book Tour (Seattle Q&A) Part2
In the second part of the video Scott covers such diverse topics as Sci-Fi Channel’s lack of foresight and how when it appears he has made a mistake it is actually sabotage by J.C. Hutchins.
Tags: video, Natalie Metzger, Scott Sigler, books, QandA, Sci-Fi-Channel, JC Hutchins,
Sigler Book Tour (Seattle Q&A) Part1
I’m not lucky enough to live near any of the book stores Scott Sigler was signing at, but luckily Natalie Metzger captured this video of one of the Q & A sessions.
Tags: video, Natalie Metzger, Scott Sigler, books, QandA,

Playing for Keeps Characters – Set 1
Three of the character cards Natalie Metzger produced for Mur Lafferty’s “Playing for Keeps”. Shown side by side with the black and wite ink versions.
Tags: artwork, Natalie Metzger, Mur Lafferty, Playing for Keeps,
Fresh Pics of Mulder & Scully
Slice of Sci Fi has three photos of Mulder & Scully from the new X-Files movie. There nothing super special, but seeing these I’m a lot more excited about seeing this when it comes out.
Tags: X-Files, David Duchovny, Gillian Anderson, movie,
Scott Brick Presents
One of my all time favorite audiobook narrators, Scott Brick, has launched a blog. If you’ve never heard one of his productions I recommend you seek one out and give it a listen.
Tags: Audiobooks, Scott Brick,
New PDF reading software for Sony Reader: Reflowing and resizing will help cope with small-screen issues
Apparently Sony Reader is going to have a way to reflow and resize PDFs for reading. My opinion is the PDF is the single worst e-book distribution method, but this would at least make them usable. Hopefully other devices follow suit.
Tags: PDF, Sony Reader, e-books,